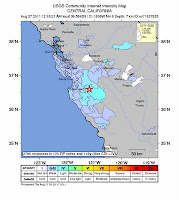 It's Saturday afternoon and I feel like I'm watching a chilling rerun of "The Day After Tomorrow." Hurricane Irene (and the shakers in California) are keeping me on edge. I did predict a Category 5 would hit the Atlantic Seaboard this year--I was wrong, sort of. Irene was a 3 downgraded to a 2 and now a 1--but the flooding potential I sense is going to be historical (I did note this hurricane would go down in history). And yes, New York City is a mega concern of mine and I can see (psychic girl here) water, water, water and mega power outages. (Been there, done that in December at Tahoe in a snowstorm for three days. I felt like the character Sam in the sci-film while I wore a hooded sweatshirt, jeans, and sat by the fireplace with a huge, crackling fire. I felt isolated not being plugged into the world.)
Meanwhile, on Wednesday I was on Coast to Coast and The Mancow Show and I forecasted that the West Coast (including the SF Bay Area) could be next in line after the 5.3 CO, 5.8 VA, and two jolts on the Hayward Fault in the SF Bay Area. Well, look at the map above and you can see a moderate quake hit in the Pinnacles (San Andreas Fault Zone, the Big Daddy) south of San Jose. Early this morning the Earth moved and this 4.6 was widely reported felt in the SF Bay Area all the way up to Reno, 50 miles from South Lake Tahoe--my home.

Back to Ms. Irene... Some say Irene is a "dud" or "fizzled" -- I say the jury is still out as I did back when Katrina made landfall. I watched anchors do high fives saying all was OK but in the morning the levees flooded New Orleans, as I sensed would happen. I'm not saying NYC will be under water like that but I see water, water, water from a storm surge; mega power outages; chaos with transportation.  I'm talking rain, flooding, flash floods and a mess.

One more thing: The saturated ground from previous rain and the New Moon/High Tides are making this a set up for the "perfect storm"... So, is the media blowing this storm out of proportion? Not sure.  But if I lived on the East Coast I'd be in prepared mode as I was during our Angora Fire in 2007; 7.1 World Series quake in 1989; Santa Cruz Mountain flooding in 1982...And yeah, I've been hitting the crunchy peanut brittle (again) and Zen--my seismically sensitive Siamese-mix just jumped up on my lap. It's 81 degrees! Worse, it feels like earthquake weather outdoors.
Posted by Cal Orey, Author-Intuitive at 2:45 PM