Take one was canceled due to a 100 mph storm; take two a 7.0 earthquake was enough to spook me.  I'm booked to go in December, third attempt. Here, this is the first seed of my goal to go to Anchorage, Alaska...

Here I sit on Saturday night in the comfort of a Tahoe rustic cabin older than I am--and I am filled with a mixed bag of emotions. Soon I will be on my way flying in a jet plane (more than one) to Alaska. This wasn't one of my fantasies, not really. Well, in my twenties I almost hitched and hiked to Homer (during the pipeline days and time of nomads in search of America) but I ended up in other states and Canada...sweet Canada a place I like to think of as my semi-second home. 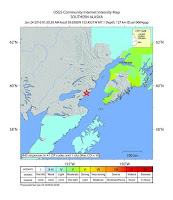 In the past decades, I've written about Alaska--its big earthquakes including the great one in 1964--and have accurately forecasted shakers throughout the shaky state...and now? Now I am close to going there--a place I saw in the film "Insomnia" and how Al Pacino's character fought the daylight so he could get some much needed shut-eye...

Go Somewhere Exciting Instead of Canada
It began by a sibling's dare to go somewhere exciting. Once Barnes and Noble in Anchorage, Alaska invited me for a book signing it was a sign for me to go to a place foreign to me. After all, I do live in a nature-oriented place called the Sierra; it's just another extension of bears, birds, water, and down-to-earth people, right?  A little bit like that. And I admit I have fell into watching the Alaskan Vet on "Animal Planet" and viewed a program of folks buying homes in the Alaskan wildnerness.
So, why do people get excited and nervous before going on trips? Is it because we are going out of our comfort zone? Is it because we relinquish control to whatever is out there in the world? Is it because we leave our safe place and loved ones behind? It's probably a combination of all of the novelty. 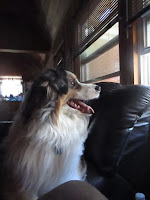 But traveling is good for the soul. I notice a glow in my skin before I go on a journey--truly! Not so sure the dog and cat are glowing but they do not know yet that I will be leaving soon. No luggage is out and I'm sort of behind the hustle bustle pre-trip mode. The obstacle course has been completed, though: vet check for dog, cat; dentist, doctor...all done. We are healthy and getting many of the ducks in a row. Emails are coming in from different places, including the airline, bookstore, nature tour and so it goes.

And, let's face it. The trek is a long one. It's not a direct flight because I do live in the mountains. It will be a very long day for me to go from Tahoe to Alaska via Nevada, Utah, Washington--and then the red state. But once I'm there I sense all will calm down in this busy mind of mine. Two years ago this time I flew to Montreal and took a train to Quebec City...Decades ago I hitchhiked from the Golden State to Montreal and freaked from cultural shock but vowed to return...I did it.
So this north to Alaska trip should be a walk in the park. Sort of.  No, I have not told the Aussie. I just don't have the heart to tell my better half we will be separated for a bit. But I did tell him no matter what I'll always be back for him and never leave him alone. That's a promise.
Posted by Cal Orey, Author-Intuitive at 3:51 AM