﻿﻿
Last Friday I took a trip 50 miles away from Lake Tahoe to Reno, Nevada for a signing of my Healing Powers book series. As a reclusive author-intuitive, this was a big trip for me. But it's not like I haven't done the book tour thing at B&N bookstores before. I have experienced the West Coast book tour adventure--I have.
I've done lectures/signsing at B&N bookstores in Chico (college kids kept me up all night);  Seattle (amazing solo trip and fell in love with the mini SF); San Francisco (big audience with Geologist Jim Berkland); San Mateo (for my book Doctors' Orders but no docs arrived); Sacramento (big audience and my face turned red when reading); Glendale (bigger audience with Berkland and quake sensitives); and Palmdale (was on TV after the book signing); and many other B&N stores.
Sometimes, I've greeted a crowd of more than 40 people. Other times it was like a ghost bookstore. You never know what you're going to but you go with the flow. This time around last week it was Black Friday and the bookstore was buzzing with people and dogs. Yes, canines. Sure, my poster boasting The Healing Powers of Honey book teamed with a photo of my beloved Brittany Simon was next to me--and so were special dogs clad in a variety of human-type suits. So it was two hours of talking to locals about the powers of honey, vinegar, chocolate, and olive oil...

As I sipped a comped Pumpkin Latte I sort of wished my forthcoming coffee book (due to be released July 2012) was with me and my Healing Powers children. But I did get a sweet cuppa holiday java and enjoyed dangling conversations with two-leggers and four-leggers. Yep, the book signing went to the dogs.
I even had one woman put her Doxie in my lap. The pooch was clad in a Santa's suit. What can I say? If you can't beat 'em, join 'em. It was fun despite I sold several books instead of dozens. And I admit I was happy to return to Tahoe's trees, lake, cool temps, and my Brittany duo whom I left at the kennel and Zen cat who held down the cabin for his reclusive mountain authoress who took a trip to the city. 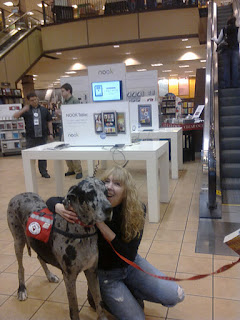 Labels: Barnes and Noble in Reno, Kensington, The Healing Powers of Honey, The Writing Gourmet