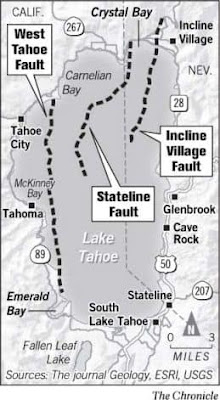 I heard my parents talk about a monster quake and killer waves, like the ones Crescent City, California, residents experienced when a tsunami swept in from the Pacific Ocean early on March 28, the day after the unforgettable quake struck Alaska. It was a surreal and unbelievable nightmare. It was miles away from my safe world in middle-class suburbia.  I couldn’t imagine such a life-threatening catastrophe . . .
There I was, months later in the summer on the porch steps of our house in San Jose, California with my Dalmatian Casey. It finally hit home. I was awestruck at the National Geographic magazine pages of snow-covered ground with gigantic cracks. Anchorage and other Alaskan cities were devastated...
This event happened decades ago. As a sensitive Californian with a vivid imagination, earthquakes and tsunamis are never too far from my mind.

Currently, living about one block away from Lake Tahoe, I realize that if a major shaker hits in the sierras, it could cause an underwater landslide and a seiche could occur. It has happened centuries ago--it may happen again.
New Study, Southern California Tsunami 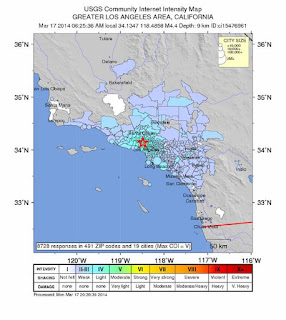 Last night I was a News Segment guest on Coast to Coast A.M. I was asked to comment on the new study about Southern California and its potential to be hit by a tsunami in a Borderland region--Ventura and Oxnard. This area could rock and roll from a 8.0 and yes, an underwater quake could create a big wave up to 23 feet high and flood more than one mile inland, say scientists... Yes, this event would be devastating, with little time to prepare, affecting ports, boats, and a heavily populated area. 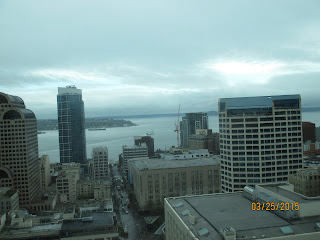 But hold the phone. As said before on C2C, a more deadly quake and big wave is more apt to happen north, including the Cascadia Subduction Zone and/or Alaska--places where great earthquakes have hit before and most likely will strike again.
If and when this happens thanks to technology (smart phones and computers) there would be tsunami alerts and people would have time to head for higher ground. Still, we're talking a 100 foot wave and the water damage? One mile inland seems like a cake walk in contrast. When asked last night how much water would flow onto land...I quipped: "Did you see the film 'The Impossible'?" and "Do you remember watching footage of the Sumatra earthquake?"
The bottom line: Yes, I did forecast a California major earthquake could happen in 2015. I did include Southern California and did say "tsunami" but it could be generated from Alaska, like it did in 1964, the Pacific Northwest (a favorite place for me), or now, even in the southland. The question isn't will it happen--it's when.
Posted by Cal Orey, Author-Intuitive at 10:41 AM