As a thirty-ish graduate and health gastronome, living in the San Francisco Bay Area, I escaped south to the Gilroy Garlic Festival for the thrill of it. The annual event was crowded, garlic aroma filled the hot summer air. The garlic-centric scents permeated a different smell in each food booth. There were so many stands filled with so many garlic foods to sample and buy. I, of course, did both...

I ended up munching on garlicky onion rings. I relished a slice of sizzling garlic and basil vegetarian pizza, followed by a garlic cold and creamy ice cream cone. I brought home a bag of garlic bulbs to spice up my rice and vegetable dinners—my staples for losing body fat and gaining muscle. Not to forget a ceramic garlic braid I valued and hung in the kitchen as a reminder of how I lived near the garlic capital of the nation. And whenever I get the craving to visit the Pacific Ocean, a visit to Gilroy for fresh garlic bulbs is on the to-do list each and every time for the sensory thrill of it.

THE FAMILY TREE OF GARLIC

Food historians report 6,000 years ago, garlic was recognized. Romans and Greeks believed garlic was ideal for stamina—and people in the Middle Ages need vim and vigor to cope with a hardy lifestyle. Garlic was one of known herbs used to guard against the bubonic plagues.

Hippocrates, a Greek doctor and the father of modern medicine, is believed to have used garlic for curing both infections and sprains.

During the Victorian era, the herb was believed to be strong and too bitter to enjoy. Also, some herbalists claim religious groups, such as Buddhists stayed clear of the harsh herb. In fact, garlic was believed to have aphrodisiac properties and was forbidden to eat by some people.

In 1990, the First World Congress on Garlic, held in Washington D.C., the place where it was noted that garlic was acknowledged as a scientifically supported healing herb. 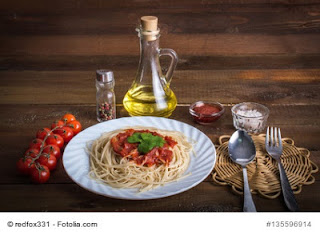 Pasta with Garlic and Tomatoes

Pasta with garlic and tomatoes is an Italian dish that can be made quickly. Make sure to use your favorite extra virgin olive oil for it. This recipe is easy on the budget. Two favorite herbs—garlic and parsley—make it a perfect dish for any time year-round. It is a fail-proof recipe which can be used for a side dish or a light meal.

Marjoram or basil for garnish

Bring a large pot of water to boil. Add pasta and salt. (Italian chefs recommend salting the water to the salinity of sea water.) Cook pasta, several minutes, until al dente (not overcooked). Drain. Do not rinse. Heat oil in a nonstick skillet over low heat, then add garlic and sauté, do not overcook. Stir-fry tomatoes in same pan. Transfer drained pasta to warm serving bowl. Add the garlic and tomatoes to pasta. Toss. Top with cheese.

Herbs and spices play a big role in my life and well-being in California. In December 2019, pre-pandemic era, my solo expedition en route from Lake Tahoe to Alaska aka "The Last Frontier" finally happened.  As I traveled through hurricane-force winds, an almost flight diversion to Fairbanks, I anticipated fresh and exciting seasonings, northern lights, and a moose sighting. Sometimes, fantasies are healthier than real life... 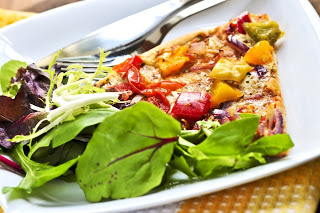 The last night I was nursing a sore throat. Blame it on frigid air blowing down on my bed in a pricey suite. I went with the flow... ordered a Greek pizza. It had chunks of real garlic! Another herbal highlight of the Alaska adventure was finding an artisan chocolate shop. I bought a peri-cayenne pepper truffle, caramelized pear saffron chocolate, and a white square of chocolate with pink peppercorn. The cayenne and dark chocolate gave me the gift of those feel-good endorphins and soothed my raw throat that hurt when swallowing. Both garlic and cayenne made me feel better...

Adapted from The Healing Powers of Herbs & Spices, published by Kensington

Posted by Cal Orey, Author-Intuitive at 10:23 AM