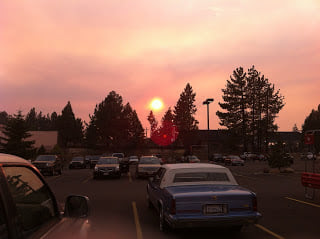 As California wildfires ignited, I sensed my town of Lake Tahoe could be next in line—and in a round-about way it was affected. Worse, the drama was complete with tourists from pandemic hot zones. The ordeal was sci-fi-ish like a nuclear winter.

Here, are my memories of what it’s like to live and survive being surrounded by out of control wildfires in the mountains of Lake Tahoe…

Wildfires in the Golden State…

The August 2020 lightning-caused wildfires were a series of hundreds of wildfires that ignited across Northern California in mid-August, from a rare, massive thunderstorms and unusual hot dry air. The August lightning fires include three massive wildfires: the SCU Lightning Complex, the August Complex, and the LNU Lightning Complex… And there were hundreds more wildfires burning throughout our Golden State. On August 19, more than 10,000 lightning strikes, almost 400 fires happened. Thousands of people evacuated their homes…as firefighters fought the flames.

On TV I watched Santa Cruz Mountains, a place I used to live, struck by the wrath of nature. The beautiful historic redwoods burned. As a journalist I covered the Oakland Firestorm in October 1991, evacuated the South Lake Tahoe Angora Fire in 2007 – so I empathized with the events.  And I sensed danger coming to us amid forests.

But this time it was worse. Locals and tourists were warned against going outdoors due to the air quality. First, one morning I noticed my food-loving, healthy Siamese senior cat wouldn’t eat and was lethargic. I rushed him to the vet for an ER visit. He was fine hours later. That night, my dog, a healthy seven-year-old cat was sneezing – and so was I. These were red flags.

Then, the next morning when I awoke at 4:00 A.M., my eyes were watering. I took an allergy pill to help lessen the symptoms of headache, sore throat, earaches, and itchy eyes. Upon getting up the smell of smoke, no sun were signs this what not normal-ish. I logged onto my computer and started looked at the numbers on the quality air indexes. We were in the high 200s and 300 one day. Icons of a human wearing a N95 mask were showing in towns around us and the words “hazardous” and “dangerous” faced me.

I ordered another air purifier, turned on the ceiling fan, two box fans. And I called the police. The dispatcher was clueless. She did not know if we would have to evacuate. I logged onto a locals group website and we shared physical symptoms. Not good.

I was hardly alone. People in Southern California, the San Francisco Bay Area, and Central California were coping with hazardous wildfires, unhealthy air – making all of us more vulnerable to COVID-19.

Worse, we were dealing with a historic heat wave – in mid-August August, Death Valley hit 130 degrees! At any time a blackout could have happened anywhere and here at Lake Tahoe. No fans, no purifiers. I was preparing for the worst – fight or flight response kicked in but there was nowhere to go.

My dog continued to sneeze. Both kitty and doggie threw up. I agonized looking at my aquarium. “Are my fish going to die?” I wondered as I recalled during the past 2007 Angora Fire. I did lose to dear fish. And the cable guy told me he suffered lightheadedness and nausea while working outdoors during the days of containing the wildfire.

Decades ago, when I first visited South Lake Tahoe, we were surrounded by wildfires. All the roads were closed – nobody could come in or out. I walked my dog outdoors and only thought about how the ash and lack of sunshine ruined my tanning and fun. I didn’t know the consequences of wildfires and smokey skies.

Warnings for all people – healthy, too – were told to stay indoors. So, I stayed hydrated and drank water – lots of it – and was thankful for the purifiers on 24/7. We were told like in the past for sensitive people – all people and pets – to stay indoors, shut the windows, and cease physical activities.

Nowhere to Flee, Everywhere was Hazardous!

So, amid a pandemic with some people wearing masks and others not, there I was trapped. The air quality in California was bad everywhere – Nevada and Oregon were worse. The threat of a wildfire hitting our town was also a challenge. Stuck. I was hoping for the best and preparing for the worst-case scenario as authorities told us. Even worse, 18 of Tahoe forests and campgrounds were closed. And the spookiest scenario? During the red flag wildfire warnings (when the winds are high, thunderstorms and lightning) if we had to evacuate due to a wildfire there is only one highway out of town. Gridlock.

One night we were told a storm was forecasted and I couldn’t sleep. Once I shut my eyes the sky lit up like Fourth of July. It was beautiful and scary – it was obvious nature was on a roll and there was nothing I could do but go with the show.

But it wasn’t just California… Wildfires, unhealthy smoke in a pandemic – and reports of birds were falling out of the sky dead on the ground in Washington to New Mexico. Worse, the smoke made its way to the East Coast and even Europe.

On September 18, the wildfires were beginning to be contained. The air quality was improving. No more raspy throat. No more sneezing. The sun was shining. I screamed, “38!” when I saw the two digits showing me our air was good. And I went for a drive with pooch for the first time in weeks. I could see the mountains.

No, it’s not our fault – because we didn’t rake our forest floors. The deal is, 10,000 lightening caused fires in 72 hours – this is rare and unprecedented. Also, almost 60 percent of the California forests are national. So as Californians are reprimanded for not cleaning up the debris –- but we do not have proper national funding.

Years ago, I was taught by firefighters (all ranks) and climatologists that fire season will be year-round – not seasonal due to climate change. After surviving the summer of 2020, I am a believer. Climate change and weather are not the same thing. The California wildfires were not all of our fault. Climate change is real – and it is changing now as it has in the past, a cyclical effect. But taking care of our forests is important, too.

Sure, I survived as did my family and people in our town. But never in my lifetime did I envision me coping with a pandemic, wildfires, and deadly smoky skies all at one time. What I learned from these crazy challenges is that clean mountain air is a treasure as is staying healthy and coping with uncertainty one day at a time. I will never take these things for granted –I am truly grateful that I can see clearly today. And I can exhale once again.

Posted by Cal Orey, Author-Intuitive at 11:28 AM