5 Autumn Secrets How Vinegar Rx's Fizzle Out the Flu, Cold... 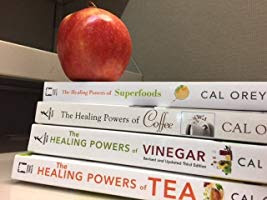 By Cal Orey, The Writing Gourmet
"Nature opened the first drugstore." -- D.C. Jarvis, M.D.
As the author of The Healing Powers of Vinegar: A Complete Guide To Nature's Most Remarkable Remedy (all formats, 3rd edition, sold more than 1/4 million copies), I can't help but notice that apple cider vinegar is getting a lot of attention on the Internet. One foodie blogger noted today the powers of the ancient Rx and fruit. Good catch. Yep, both vinegar and fresh seasonal fruits teamed with vegetables are chock-full of nutrients that enhance your immune system and can help you stave off or fizzle out the flu--old-fashioned seasonal flu or even stave off catching COVID-19, too. Living in a resort town, with a lot of worldly visitors, going to store(s), the swimming pool(s), theater, and just living life has got Lake Tahoe locals and folks around the globe, like me and you, thinking "What if I get sick?" Here, take a peek at five vinegar home cures (for the "worrried well" or if you're already feeling a bit under the weather) to help you sail through the fall flu season...

1 Bye-Bye Cold. Got a runny nose, sore throat, cough, muscle aches, and pains? Poor baby, you've got a cold. Rose hips, a key staple in the diets of Native American tribes, may help boost immunity and provide relief from cold and cough symptoms. If you pair up this herbal wonder with vinegar, you might be able to say good riddance to your nasty bug. Or, you can turn to vinegar solo.
Vinegar Rx: Mix 1/4 cup of apple cider vinegar with 1/4 cup of honey. Take 1 tablespoon at least three times daily. Repeat as needed.
2 Clear Up Congestion. When it comes to fighting colds and sinus congestion, apple cider vinegar comes to the rescue, according to folk medicine.
Vinegar Rx: To clear up clogged respiratory congestion, inhale vapor mist from a steaming pot containing water and several spoons of vinegar.
3 Stop A Cough. Hack, hack, hack. Coughs come with everything from the common cold to acute bronchitis, which cause mucus in the throat and lungs. Not only is coughing annoying, but it can hurt your chest after a while, too. Soon you want something to make the symptom go away.
Vinegar Rx: Mix 1/2 cup of apple cider vinegar, 1/2 cup water, 1 teaspoon of cayenne pepper, and 4 teaspoons of honey. Take 1 tablespoon when your cough starts up. Take another at bedtime.
4 Soothe A Sore Throat. When you feel the sniffles or flu coming on, a sore throat is often a symptom. While healing foods like vitamin C-rich juices can lessen the severity of an illness, vinegar may help relieve that scratchy, painful feeling in your throat that makes it so hard to swallow.
Vinegar Rx: To get rid of a painful sore throat, gargle with a 50-50 solution of warm water and vinegar.
5 Fizzle Out The Flu. Do you have muscle aches and pains, headaches, low back pain, fatigue, and fever? If you are a victim of the flu season--or don't want to be--drink plenty of fluids. Water, herbal teas, and other liquids can flush out any toxins that you might accumulate, notes Ray Sahelian, M.D., of Southern California. For instance, goldenseal makes a great immunity-boosting tea because it contains berberine, an antibiotic substance that is a great flu fighter.
Vinegar Rx: Try 1 teaspoon of the ground root of goldenseal in 1 cup of boiling water. Steep for a few minutes, then strain. Add 1 tablespoon of apple cider vinegar with honey or lemon. Repeat three times daily.
The Four Thieves Flu-Fighting Rx
As the legend goes, during the Middle Ages, four robbers in a French town preyed upon the homes and belongings left behind by the people who fell victim to the bubonic plague, or “Black Death” of Europe. Eventually, they were caught and brought before judges, who wondered how these four thieves had protected themselves from the deadly plague while looting plague-ridden possessions.
It’s been said that the thieves bargained the famous Four Thieves Vinegar Formula for freedom, explaining that they washed themselves with the infection-fighting liquid every few hours. Upon learning about these immunity-boosting qualities, the formula was also used by priests and doctors who treated the ill.
No one seems to know who wrote the formula, which differs from recipe to recipe, but it is basically the same and it works in various ways. It’s recommended to dilute with water to half strength. It can be used to disinfect sick rooms and as a body wash. Taken by the teaspoonful (consult with your doctor for the safe amount), it can also be used as a preventive measure to stave off viral infections, such as the flu and help prevent and cure a sore throat, headache, and other physical flu ailments.
The Formula: Basic ingredients: Combine 3 quarts apple cider vinegar; 3 tablespoons each of rosemary, lavender, sage, mint, rue, and plantain; and 6 cloves of garlic. Let it sit in a covered container for at least 24 hours.
Where Can You Buy Vinegar and Herbs? To avoid a possible price increase, stock up. If you live in the U.S., you can get apple cider vinegar and herbs at your local health food store and grocery store.
Posted by Cal Orey, Author-Intuitive at 12:16 PM