Where Have All the Honey Bees Gone?

This morning at 8:30 AM, I was a guest on SF KSFO. Host Bob Tanem and I dished on honey, bees, pollen, and the healing powers of nature's nectar. Informative, fun... You can tune into the podcast next week if you missed it.
Meanwhile, take a look at this info, straight from my timeless book--available at Walmart  to Amazon and other fine bookstores as well as the publisher Kensington. The Healing Powers of Honey has also been given praise by The Bee Journal, Wellbella, Newsmax as well as enjoyed at book signings at Barnes and Noble bookstores, including Reno, NV, Roseville, CA, San Jose, CA, and Bellevue, WA. 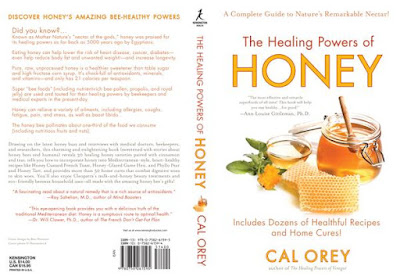 Where Have All the Honey Bees Gone?
Q. Colony Collapse Disorder was excluded as a cause of the dead bees in the Florida incident. So, what exactly is this term?
A. Back in 2006, an apiary owner in Lewisburg, Pennsylvania, made the problem known. Penn State researchers took note of the bee colony decline, due to a condition now known as Colony Collapse Disorder (CCD). This condition causes honey bee colonies to simply vanish without a trace—go AWOL leaving their hives in the dust—lending to eerie images of The Happening and I Am Legend sci-fi films of human and animal extinction.
Q. What are some of the theories behind CCD?
A. Theories include climate change, diet, mites, pesticides, and viruses. Also, the stress of traveling for pollination of crops and the usage of cell phones (perhaps due to the radiation), chemtrails, and even changes in the Earth's magnetic field are in the mixed bag of possibilities for why the bees are vanishing and leaving their beekeepers out of work and shocked by losing half or more of their prized colonies to an unknown cause.
Q. How will the die-off of the honey bee affect our food chain?
A. Millions of acres of U.S. fruit, vegetable, oilseed, and legume crops depend on insect pollination—and that includes the sacred honey bees. This little insect giveshuman gifts from the hive but also helps pollinate our crops (one-third), home gardens, and wildlife habitat. And don’t forget most beef and dairy products enjoyed in the United States count on insect-pollinated legumes, such as alfalfa and clover. Worse, if the bee disappears our food chain would decline in diversity and quantity, and images of the futuristic doomsday films without fresh food like Soylent Green and The Road could become a grave reality.
Q. What are scientists doing about CCD?
A. The U.S. Department of Agriculture is trying to help get a handle on Colony Collapse Disorder. In 2010 it dished out $6 million in emergency assistance to beekeepers who had lost their bees. And scientists are busy at work trying to discover what exactly is causing the vanishing of honey bees.
California bee expert Dr. Eric Mussen of UC Davis says, “None of us know why the bees are not as vital as they used to be. In many cases this may be due to limited access to a good varied supply of pollens.” He hopes in our lifetime scientists will discover what is killing the honey bees. “But,” he adds, “even if we find the cause, will we be able to overcome it?”

Q. What can you do to help keep the honey bee alive and well?
A. Devote a portion of your property to growing annual and perennial plants the bloom consecutively over the whole season that honey bees are collecting nectar and pollens for food. Reduce the pesticides of all kinds to a minimum. In areas with extended dry periods, supply fresh water in a way so that visiting bees don’t become a nuisance.
Consider donating funds to bee researchers around the country who are trying to determine the cause of CCD and what can be done to bolster the bee populations.

Excerpt from The Healing Powers of Honey: A Complete Guide to Nature's Remarkable Nectar! (Kensington, October 2011)
Posted by Cal Orey, Author-Intuitive at 11:25 AM