Update: On Coast to Coast AM, this past August 5, as a News Segment guest, I did say on air (at 2:45 minutes) SF could rock any time in the future and anywhere in CA...not excluding SoCal--which still could be next in line before the end of 2014.

On August [12] in the afternoon my two dogs were barking nonstop. I walked out into the living room and looked out the window to see a man taking photos of a bear in our neighborhood. I told him last time this happened a huge crowd of people were watching the animal. The thing is, we don't get a lot of bears at lake level. And I said to the people that an earthquake will hit within the week in the sierras or the SF Bay Area. And it did. (See article below published in the Tahoe Daily Tribune.) History repeats itself. 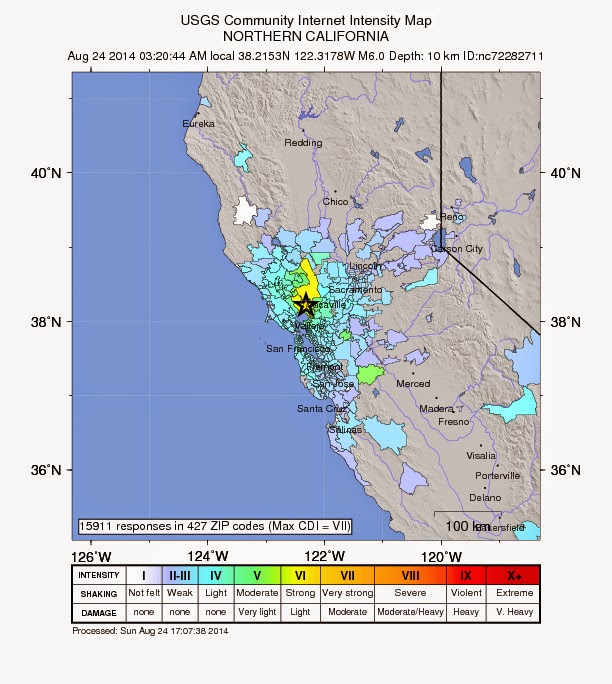 In my annual Earth Predictions column for 2014 I wrote: A Mixed Bag of Predictions for 2014

1. Earthquakes
* At least one major shaker is likely on the West Coast, including Alaska, Washington, on and Offshore Northern California, the San Francisco Bay Area and/or Greater Los Angeles as likely areas to rock. 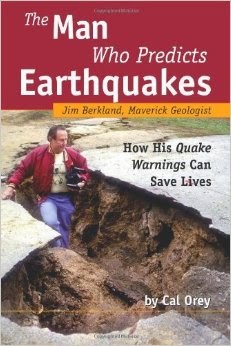 This time, however, as reports come in, the shaker was much stronger  than the Bay Area 5.6 several year ago (October 30, 2007)--and some say even stronger than the Loma Prieta '89 quake geologist Jim Berkland predicted.  This morning the earthquake caused lots of damage and injuries. Another Update: As noted, the wayward animal tipped me off as another bear did in the past. True, bears are part of Lake Tahoe but to be seen at lake level isn't all that common. As felt reports come in, look at how humans report feeling the earth move all around Lake Tahoe. More reports of damage in Napa and more reports of people feeling the earthquake CA/NV--like the one back on October 30, 2007--covered in the Tahoe Daily Tribune...

Did the bear in my neighborhood sense an oncoming earthquake? Is the Sunday early shaker a prelude to the Big One? Time will tell. But on C2C, August 25, I did say I sensed the quake that rocked California could create a trigger effect and SoCal or even NorCal could experience a stronger temblor within the next two months. 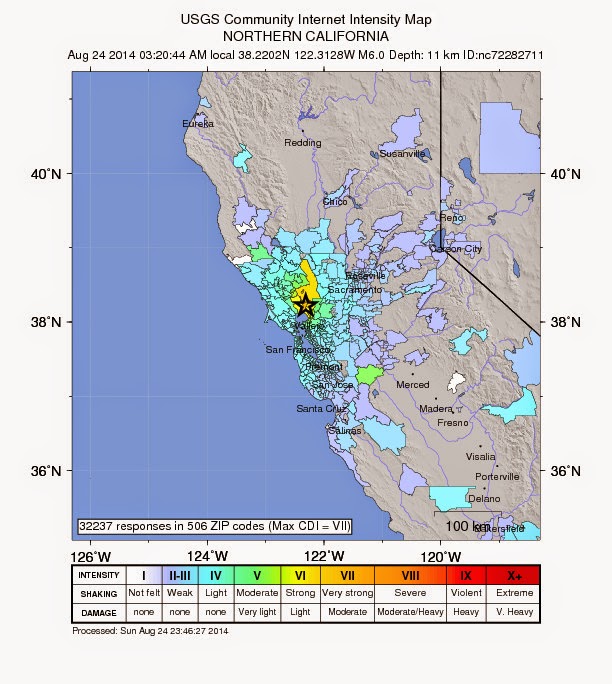 foresaw Tuesday night's 5.6-magnitude San Jose earthquake in September. And what's more, she documented it just days ago on her
Web site.
Cal Orey, a writer of several books, including a biography on Bay Area geologist Jim Berkland, who predicted the Loma Prieta
quake in 1989, says she hit the prediction well ahead of time
and sees more on the way.
"I believe this was a foreshock. I see a 5.8 to 6.0-plus earthquake that could hit on the Calaveras, Hayward or San Andreas fault
by Nov. 30," Orey said.
This 5.6 quake is a strong but moderate earthquake, the largest one to hit the Bay Area since Loma Prieta in October 1989. Orey says she was tipped off again a few days ago by the Oct. 26 full moon.
"The tides were erratic," she said. She pinpointed her Oct. 26 prediction at Alum Rock, which was the near-epicenter, east of San Jose.
Also, on Saturday, Orey and her neighbors saw a disoriented bear next door to her house in Bijou Pines.
"In eight years, I've never seen a bear this close to town. I said to the crowd of people taking photos of the animal,
'This could be due to the Angora fire and the bear is hungry, or a quake is coming here or to the Bay Area in a week.'"
Orey made the prediction Oct. 26 on her Web site.
According to reporting statistics compiled by the U.S. Geological Survey, the quake was felt all the way to South Lake Tahoe, Tahoma and even Minden and Carson City.
"Historically, the Hayward fault has had larger quakes. And scientists are saying that a 6.0-plus could occur on this fault or the Calaveras fault in the future," Orey says. "I have a wager with geologist Berkland that Northern California will get a 6.0-plus before Southern
California. I won the last wager for a 5.0, which hit Northern California first. I may win this one, too."

Posted by Cal Orey, Author-Intuitive at 10:02 AM