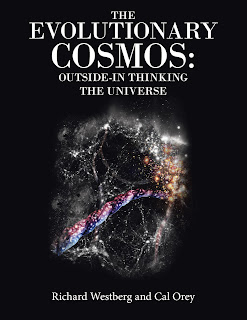 While the events of our world and our personal lives are truly important to our understanding of the Universe, in the grand scale of what this Universe is, our world is but one tiny percentage of what reality has become over the millennia. While there is nothing wrong with placing importance on things which truly matter to us, being able to understand our place in the Universe and being able to step back and realize we are not the center of the universe itself is an important tool as we get older. As Carl Sagan once said, “Our posturing, our imagined self-importance, the delusion that we have some privileged position in the Universe, are challenged by this point of pale light. Our planet is a lonely speck in the great enveloping cosmic dark.”

In authors Richard Westberg and Cal Orey’s The Evolutionary Cosmos: Outside-in Thinking The Universe, the authors take readers through an exploratory and thought-provoking journey into the understanding of the Universe as a whole. An at-home yet thoroughly researched examination of the Universe, the authors set out to show how the mass of the Universe, magnetic lines of force, atoms, planets, stars, galaxies, and clusters of galaxies can be made up of two mirror image pieces of two-dimensional magnetic mass. A blend of their own research and existing data which can be corroborated online, the authors explores the concept which our modern understanding of science has stagnated, and a new approach to the subject could be what the world needs to better understand the Universe and its properties as a whole.

This scientific and thoughtful read was mesmerizing. The authors expertly crafted a book which felt both personal and educational all at once. The concepts and ideas which the authors relayed felt brand new – yet built upon some fascinating scientific concepts that already existed. The authors did a great job of crafting the tone and scientific terminology together in a way everyone would be able to understand and follow, and even included a great source of references and definitions of those scientific terms at the end of the book.

The book is absolutely the best pick for readers who are looking for non-fiction reads which delve into science, in particular non-fiction science reads that deal with space, the Universe, and the properties which make up our Universe as a whole. As a space and Universe enthusiast, it was fascinating to see the authors’ take on this subject and the exploration of new ideas and concepts in a field which has been pretty stagnant for a number of years.

Captivating, engaging, and gripping, authors Richard Westberg and Cal Orey’s The Evolutionary Cosmos: Outside-in Thinking The Universe is a must-read non-fiction science book that cannot be missed this year. The unique perspective the authors bring and the very personal approach the message takes as the lessons and educational aspects play into the authors own experiences make this a fantastic book that readers won’t be able to put down.