Snow Armageddon in the Sierra 2017 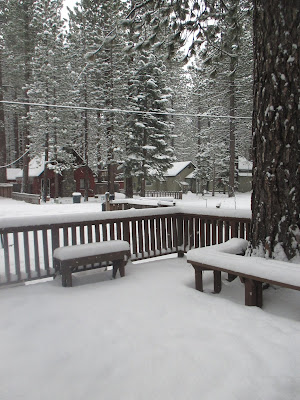 In the early winter at the sierras of Northern California, the severe drought continued but I was happy with mild temperatures, less tourists, and color changes of the fall. Despite the lack of much needed water the West requires, living in the mountains is a serene environment. And then it happened. Our first snowstorm of the New Year arrived…

Moving ashore on the West Coast January 3, we are finally welcomed with heavy snowfall in the Sierra Mountains. The storm is a godsend and locals and tourists rejoice since it is a ski resort town. I happily carry in firewood from the garage and build a big, crackling fire. Cuddling up with my dog and cat and watching films while sipping tea is cozy. Shoveling fresh, white powder is easy and I make nice trails on the deck, front and back yards. It is a winter wonderland. 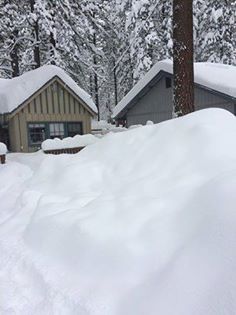 January 11
Another snowstorm rolls into the Sierra. Power outages, gusty winds, and snow at high elevations again. I forgot how beautiful snow can be. Inch by inch it falls onto the deck and at Lake Level. It was bliss, a picture postcard of heaven. Shoveling snow is something I haven’t done for a long time. “Its good cardio” I said as I removed the powder and made perfect trails. 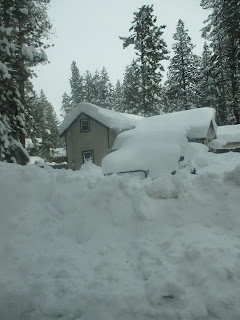 Then, newspaper headlines read: “10 Plus Feet of snow Bury California’s Sierra Nevada as Heavy Rain Knocks down Drought”… Worse, for days California back-to-back heavy rain caused flooding and mudslides, while feet of snow buried the Sierra Nevada. I sense the fun is over and challenges were beginning as my sibling purchased a snow blower.

January 15
Then, one more storm slams the sierras. Tourists are happy and hotels are filled. It is a real winter like mountain folks said we used to get. The snow piles up on the deck, and berms pile on fences so I can no longer see neighbors due to the snow fortress. With a mix of rain and snow, shoveling snow is no longer easy to do. Snow is building up on the rooftops and ice dams are dripping water at the doorsteps making it slippery to walk and taking the dog out is now a dangerous task late at night and early in the morning. Dirt and debris in the snow on the deck is an eyesore. 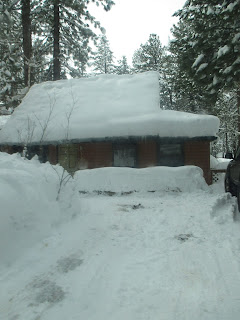 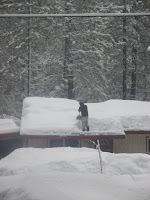 The back-to-back snowstorms are here to stay. Some main highway roads are closed. The term “atmospheric rivers” or water vapor in the sky is my scapegoat because it is to blame for rain and snow. Rocks falling on roads to avalanches are part of the snow Armageddon.  Images of The Shining psychological horror film set in the Colorado Rockies haunted me as I feel snowbound in my cabin. I can’t shake thoughts of the movie Trapped: Buried Alive when people are at a ski lodge hit by an avalanche. “Could this really happen?”

January 30
While I love walking my four-year-old Australian Shepherd on fluffy snow, dog treks on black ice and deep snow are not fun when I’m 120 pounds and he’s half my weight. As the berms pile up from two feet to six feet, my canine fell victim to snow. On a drive my sibling hit two monster berms and the pooch lunged forward in the car.  At 3 a.m., my Aussie yelped in my bed. One vet visit later, muscle strain and temporary nerve damage on his right front leg and neck. Three meds prescribed. The upside: Puppy healed in five days. The snowstorms were no longer anticipated but dreaded because of the hardships that come with it. I surf the net and price flights to Oahu, Hawaii and Atlanta, Georgia. 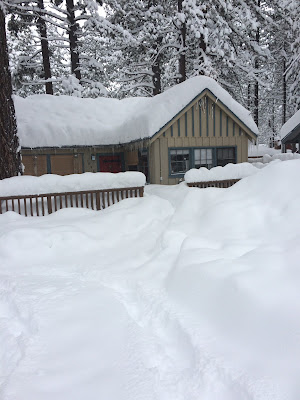 February 2
Local paper headlines hit home as I read: “Drought-easing California Snow Heaviest in 22 Years”—it was real. I wrote an ad and posted it on Facebook’s “I Love Lake Tahoe”:  Decent Proposal: One million dollars to shovel 3 trails; 30 minutes; snow guy snow-flaked. Help. It looks like a spooky snow amusement ride out there. I will toss in signed copies of book collection. Lights are on, brewing. coffee/tea... Okay. You can have my 4 yr. old Aussie, very loving and the cat. Heck, take the fish aquarium! -- Author Buried in Snow at Lake Tahoe. I wait for help. 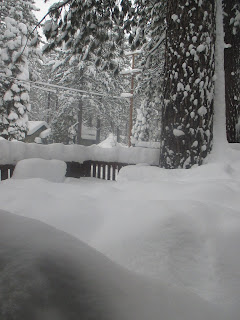 My words worked. Decent trails were dug out by a hardworking snow boarder. I read about these odd warm temperatures paired with snow that are increasing flooding threat in California. Mudslides and rockslides close two major highways from Nevada to Lake Tahoe and restrict travel on US Interstate 80 over the Sierra Nevada near Truckee. Authorities warn residents on Lake Tahoe's north shore to stay in their homes due to the threat of avalanches after nearly three feet of new snow hit the mountains overnight. I think, “Is this really happening?”

February 11
Worse, my county is one of dozens of northern and central California counties under a flood warning through most of the weekend. While we had a break until the end of the week, more storms on their way, river gauges and reports form emergency officials, forewarn flood warnings are still happening. Cabin fever hit. I am fleeing to the resort swimming pool and hot tub for an R&R.

February 12
It is surreal. Day after day, seems like a dream of endless snow, avalanches, flooding, mudslides, and major highway closures. Sometimes Mother Nature works against us and our lives face her wrath. Currently, as I watch The Weather Channel and see the dam that may not hold, and hear more storms to threaten California, I’m looking at properties in Las Vegas, Nevada, a nice, warm desert.

Wicked Wintry Weather 2017
·        Significant flooding affected parts of California including the San Francisco Bay Area, Santa Cruz mountains, and the Russian River which rose three feet above flood stage, affecting hundreds of houses with water.
·        Dams were opened to relieve pressure from built-up floodwaters, with the Sacramento Weir being opened for the first time in eleven years.
·         Over one half million customers of Pacific Gas and Electric lost power in Northern and Central California during the event.
·          If Oroville Dam fails, rural towns, Feather River down to the state capital of Sacramento, creaky levees may fail and the city may be flooded.
Posted by Cal Orey, Author-Intuitive at 2:27 PM

"Magical, witty, and unique, the novel is a trip back to the seventies and an amazing roller coaster read! Highly recommended." --Stephen Spignesi, New York Times bestselling author of Stephen King, American Master and Dialogues (Bantam), hailed as a "reinvention of the psychological thriller."

2022 Update: Newsmax is promoting The Healing Powers of Tea (newsmax.com/tea); a national women's mag is featuring The Healing Powers of Essential Oils (March issue) for its book club; Mother Jones (April issue) will reveal an article on The Healing Powers of Herbs & Spices (2021). Currently, author is working on an edgy science book, romance novel, and sci-fi novella (co-author credit). BIO: CAL OREY, M.A. Meet a versatile non-fiction health author who also pens fiction: True Crime, Humor, Romance, Sci-Fi & Adventure, and creative non-fiction thrillers based on real events, including historical, political and science topics... Plus the writer is a known on-air personality...NEW RELEASE: The Healing Powers of Herbs & Spices: Timeless Treasures #9 was published in 2021 by Kensington... It has made its way to being a pick in Woman's World Magazine Book Club, and covered by Booklist, American Global News, GlobalInformerNews, NYC Daily Post, New York Daily, City Buzz News, Huffington Post, on board with Newsmax, and in more than 200 libraries worldwide... Orey also holds two degrees in English-Creative Writing from SFSU. She is the sole author of the "hugely successful" Healing Powers Series, nine books have been graced with online bookstore Bestseller banners; (translated in 25+ languages), many featured by Good Cook and Literary Guild book clubs to Newsmax media. 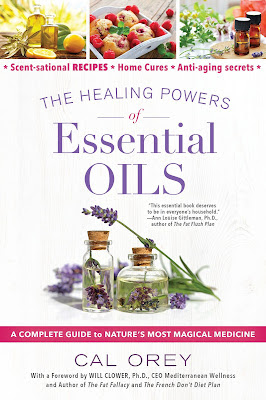