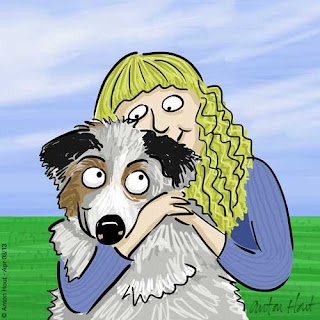 Update: Recently, a boy and his dog made the news... because they were MIA in the Sierra-and a storm was rolling in.
Off the phone networks for a bit, on deadline for my next book (yes, I predicted I would get the project), I couldn't help but use my intuition and dish my read for the thrill of it--and because I love dogs. 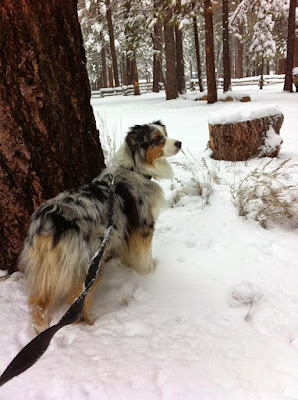 On my Facebook wall I posted many times--sharing my vivid images and gut instincts: I noted the duo was physically challenged; there may have been a bear (on a post interview this happened and the dog went into protective mode as I said my Aussie would do); in the video the dog looked like he had an issue, I said, on the "I Love Tahoe" site when the dog laid in the snow--found it odd--not a Siberian Husky and the words of its owner seemed off about it. I read the voice energy and sensed trouble ahead. I noted I saw they were likely stationary (which they were), the two would be found, okay... (Both predictions came true.)
While my posts got thumbs up on "I Love Tahoe" Facebook website, my concern went ignored on my page with 5000 followers. Go figure. I flunked math in college. So I don't get it. (I get more comments forecasting shakers on Coast to Coast AM; and even last month when I announced I was pregnant the amazing shake-up was off the charts from people who do not know me.)


Cal Orey Wow...Sensing the dog may have tried to protect him...something unexpected happened. Envisioning the two r OK but challenged.

Jen Gregory They are well-prepared. Bauer (dog) has boots!

This exchange below is a private message on Facebook with an intuitive friend--we both have sensed oncoming earthquakes in the SF Bay Area--many "hits." We sensed a bear...  And yes, an important point: the canine's paws were sore, dog whooped so the two did not go any farther. A blessing in disguise so the wayward boy and his dog could be found. And that's where "stationary" came into play and a remarkable rescue.
i'm hoping the dog isn't hurt...but could be...

The story ended well. Actually, the morning the two were found, I googled the results "found alive" and the upbeat headlines popped up, showing me the outcome I predicted. After all, I am tagged "time frame girl" on one of phone psychic networks. Bottom line: The dog and boy survived. But I knew they would do just that. The end.
Motto: Bring a backup cell phone battery. Think about dire consequences before acting and flying solo with a canine companion.
-- Author, in her 20s hitched and hiked with a black Lab across America and Canada; has the tales and scars of her adventures

So, exactly how in the world did I, a veteran author and natural Earth changes prognosticator, end up being a live part-time phone psychic anyhow?

Blame it on the Great Recession hit (yes, I predicted it). In the winter of 2010, I called a psychic (or 10) to ask, "When is a foreign rights check for my books coming--and how much?" The answers I got were zany, including "one million dollars"! I offered three realistic choices, "Choose one."  And that's when I called a psychic network manager and predicted: "I can do better."
After all, I thought, "Since I was 8, people have noticed my sensitive nature and uncanny sixth sense. After I penned the book 'The Man Who Predicts Earthquakes,' I began dishing out quake predictions on national radio shows. Reading people and the challenges that rock their world is no different."

And now I'm one of countless psychic adviser voices who charge by the minute to tune into people and be their personal Magic Eight Ball. (I've received hundreds of positive reviews. Also, I'm tagged as the "time frame" reader with dishes dates. Yes, I'm accurate about 80 percent of the time.

Tuning In to the Faraway Caller
No, I do not use incense, hold a crystal ball or provide spells. I'm often in the company of two sensitive dogs and one black cat (they relax me), and listening to alternative music when the phone rings. I am connected to a caller who is often sad, upset or confused. And, yes, this job can be stressful as well as rewarding. Think  healer.

Once I hear a voice, it sets the stage. Often I can pick up if the call is from the West Coast, South, Northeast, Canada, Trinidad, New Zealand or Australia. And it's not always the accents. It's my animal-like intuition that kicks in from the get go. But there's more ...

Hello, Mother Nature
I use the planets as a baseline, lunar cycles (emotions and calls soar during the New and Full Moon), and a tarot card to get an objective read, which often coincides with what I've picked up with my gut instinct. As a super-sensitive woman, I can predict callers' questions by tuning into their voice, energy and words.

I can also pick up why I'm being contacted, the age of a person, their sun sign (but sometimes I do ask; usually they end up being on the cusp of two signs). If I'm challenged by a skeptical caller, it can end up in a murky reading or a hang-up. It used to hurt my feelings, but nowadays, I sip chamomile tea until the next ring.

I can sense if the caller is sincere -- and then it's show time. Sometimes, the paranormal activity kind of cues I get send chills through my body. The caller feels it, too. That means that I tapped into their psyche and we connected, big-time.

I Can Feel Your Vibrations
Both my callers and I are often surprised that I know things, such as if he or she has a toothache or heartache. The most common problem I am faced with is unrequited love (one-sided romance) -- and it hurts. How do you say, "He or she isn't that much into you?" and/or "Move on for true happiness" -- especially when the caller has her ego wounded, fears being alone or is anxious about the unknown.

I do offer positive advice and words of preparedness for upcoming events (even if a caller can't see what I'm talking about yet). I tell it like it is because saying good things doesn't always bring good or accurate results. It's like saying, "A quake won't hit" when I'm looking at the USGS map, watching an aggressive swarm on an active fault, and the caller is located at the epicenter of a country in the Pacific Ring of Fire.

Fire, Earth, Water and Air Signs
Speaking of Earth elements, how do I know if a caller is a Fire, Earth, Water or Air sign? A fire sign is direct and intense, and if the topic is touchy, I can feel their heated emotions (my clavicle often aches). Earth signs are reserved, a bit shy and need a nudge to be real. I can pick up the vibe of passionate water signs' feelings and understand they want me to confirm what they know. And air signs are analytical, good communicators and have a sixth sense, but are hesitant to tune into their gut instincts.

Two days ago, a woman asked me if her sibling would survive a challenging surgical procedure. I strongly sensed "yes." Tonight, I got the answer. I was spot on. I signed on to take another call. I'm sensing the phone will ring within 15 minutes.

Oh, and if you're wondering why, if I'm so psychic, I didn't know when my book check was in the mail, the reason is this: Sometimes it can be tricky to get an accurate read on your own life. Psychic advisers frequently turn to their colleagues (or tarot cards) for an objective outlook, the way I look to the moon and planets to tell me what other people have in store.

There goes the phone, right on time. So, if you'll excuse me, I think I'll take that call.
Posted by Cal Orey, Author-Intuitive at 3:59 PM