It's a Peanut Brittle Day 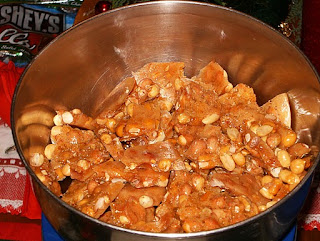 Today is Thursday and it feels like Wednesday. There is a nip in the air at Lake Tahoe and that makes me smile. Just returned from a lovely swim (not too cold but cold enough) and it's back to CoffeeWorld. Read: The Healing Powers book I'm working on as I type. Ah, I received a box of awesome flavored coffees--several kinds, including Coconut Creme to Wild Blackberry. How exciting is that? (It's got me giddy as a honey bee...The Healing Powers of Honey (Kensington Books, Sept. 27, 2011) is flying to me in August, prior to harvest season and this worker bee is thrilled as a queen bee in the comfort of her hive.)
Speaking of Excitement...I had Tahoe quakes on the brain. "What if we have a shaker and the coffee beans fall out of the pantry/fridge/freezer and my food-loving Brittanys eat 'em?" No dancing goats legend here. DOA doggies on java beans. Note to self: Get dog-proof coffee containers.
Back to the quakes. It's odd, but King (another quake sensitive) believes people eat popcorn before the Earth moves. It could be the crunch factor which can release anxiety linked to sensing oncoming quakes. I've been craving peanut brittle--a lot. The stores are all out. They had gourmet stuff and now they tell me it's a seasonal thing. Great. Now that I'm hooked it's AWOL.
Anyhow, thought I'd stop by ("writer's block") and spread the word that we had a minor quake today 3.1 (yes, I predicted it but something stronger could be in the works now through August due to the CA quake drought). Nothing to write home about -- yet, or even to share on The Mancow Show this coming Monday a.m., when I make a cameo appearance. Well, I predict something earthshaking should happen by the 18th.  Blame it on the Full Moon.  Gosh, I think I'm going to cave and order peanut brittle via online.
UPDATE: Soon after I scored 1/2 lb. of peanut brittle at Tahoe.  Not gourmet but doable. Then, the quakes came... A 6.1 (strong) hit AK.  Bottom line: More to come for the West Coast, from Alaska down to SoCal--or somewhere in between. Worse, I need more peanut brittle.  Wonder if order it online they'll FedEx it. Read: Shaky times ahead.
Posted by Cal Orey, Author-Intuitive at 3:30 PM