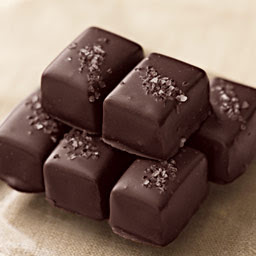 What Chocolate Rx to Use: Put chocolate bars, cocoa powder, and chocolates of any form (except fresh truffles) in an airtight container and store with other emergency products.
Why You'll Like It: If you are dealing with a disaster, such as quake aftershocks (yes, these can be anxiety-provoking as I have gone through in 2008 during our quake swarm at Reno to after the 1989 Loma Prieta aka World Series quake) chocolate can help calm your nerves, uplift your spirits, and provide mental alertness. If you are trapped at home or elsewhere like at an office or car, and have chocolate on hand, rationing the nutrient-rich superfood just may save your life, as it has for others who have endured a natural disaster.
The bottom line: No, chocolate sea salt caramels or a cup of cocoa will not fix or undo the ill effects of a mega disaster (or radiation levels soaring) or make it go away. But it may help you or if you're affected feel better like chicken soup, a cup of tea. Yeah, chocolate can nourish your body and soul, whether you're a survivor or watching other people endure catastrophic events.
Posted by Cal Orey, Author-Intuitive at 9:41 PM