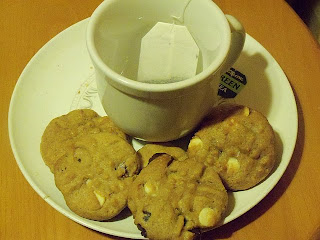 By Cal Orey,
The Writing Gourmet
I can remember that when I was a little girl chocolate was a part of holidays in suburbia, where I grew up. Once Christmas rolled around, through the New Year's holiday, chocolate chip cookies for Santa, chocolate pudding, and homemade fudge were rich treats that everyone in the family couldn't resist.
Four more days to Christmas...And if you're wondering what gift to get for you know who, chocolate may be just the perfect thing. According to consumer companies, it's the dark healthy stuff that is making the news for the future chocolate makers and chocolatiers.
Here, take a look at some sobering facts, straight from my book The Healing Powers of Chocolate (Kensington, 2010)--that'll show you that chocolate is still the crazy during the best and worst of economic times:
* Research company Packaged Facts claiming in a past report that the U.S. market for chocolate was primed for growth from $16 billion to $18 billion in 2011.
* Mintel, a leading global supplier of consumer products, believes the sweet tooth does not seem to be linked to the economic downturn. Mintel projects Americans will continue indulging in innovative dark and premium chocolates.
* The international market for chocolate has skyrocketed in Asia, where chocolate is a modestly priced and available Western luxury that attracts the middle-class folks.
* More than 6 of 10 Americans are loyal to a particular brand of chocolate, but many are trying new brands.
* What's more, nearly 4 out of 10 Americans eat chocolate at least a few times per week.
* Fifty-four percent of Americans said they eat chocolate because they like it, while 4 percent eat chocolate for health reasons.
* Chocolate is American's favorite flavor.
* Chocolate was a favorite comfort food during the Depression in the 1930s.
So, these days come with challenges for many people due to the sluggish economy due to the Great Recession. But the chocolate craze, whether you bake a batch of fudge or buy a box of premium chocolates or gourmet chocolate bar, continues on as a tradition.
Posted by Cal Orey, Author-Intuitive at 3:44 PM