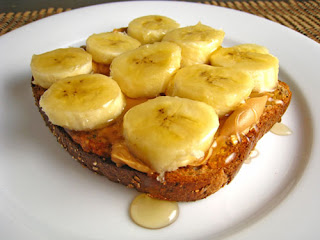 By Cal Orey,
The Writing Gourmet
As a former starving graduate student at San Francisco State (yes, I rolled pennies and cashed 'em in), I realize now I was getting crash courses on how to survive in the real world. (One professor talked the greenhouse effect; another about how to live life so you have something to write about.) Actually, it wasn't as economically scary back in the '80s because my fellow peers were all hungry and living in jeans, T-shirts, and enjoying the free things in life. The cool thing is, I did eat healthy for being flat broke. Read: Brown rice, fresh vegetables, fruits, whole grain bread and bagels, peanut butter and honey played a role in my minimalist diet...
Fast forward to the present-day. While warming isn't happening (the temps are dropping andrain/ snow will fall at Tahoe), tonight for dinner, I was going to cook a poultry dish but my little all-natural birds were still frozen. So, peanut butter, bananas, whole grain sourdough bread, and honey (I have a lot thanx to my forthcoming book, The Healing Powers of Honey, Kensington, October 2011) came to the rescue.
The sandwich of health nut students hit the spot as I nibbled on it (and my sweet and sneaky food loving pooch Seth snatched the last bite); while reading the latest news about the ups and downs of the current econony. I'm so confused. Everything is good except for a mega lack of jobs and countries abroad have caught the economic sickness. Not to forget CA, NV and other states dealing with foreclosures, layoffs, and homelessness. I give up trying to figure it all out. I flunked math in college, anyhow. But, as an intuitive (yep, I serve up answers to callers who have questions about the future), I do know and can sadly say that there are a growing number the haves and have-nots. My article "Middle Class Melt Down" (page 24) on this topic made the cover on Oracle 20-20 Magazine, December issue.
My point of this blog post? I, like you maybe even you, can eat healthy on a roller coaster cash flow. That means, sticking to the staples as noted above. These foods are found in the Mediterranean diet--what I practice and preach in my HEALING POWERS book series. These simple and nutrient-rich foods will keep you healthy and lean. And it's so much better to eat this stuff rather than processed foods and junk food. In other words, keep it simple and real and you'll survive eating well in 2011, whether you're a have or have-not or floundering somewhere in between. And now it's time for me to dish out my 2011 Forecasts, including what we can expect for the economy and food costs. That calls for a cup of hot honey vanilla chamomile honey tea (or two).
P.S. I did sense and predict the recession of 2008. My doom and gloom forecast (complete with my black cat's sixth sense) and food facts was dished out in a PR press release to radio talk shows and even geologist Jim Berkland (the scientist who predicted the World Series Earthquake). He didn't believe me at first but later did give me credit for being spot on once it was a global reality and groundbreaking news. Too bad it was a "hit" and not a miss. It's tea and honey time.
Posted by Cal Orey, Author-Intuitive at 6:28 PM