What's the Most Buzzworthy Ice Cream? 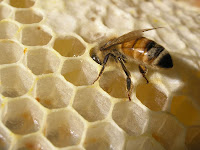 By Cal Orey,
The Writing Gourmet
It's hard being a worker bee and paying the rent. Read: Writer's Block has hit once again. Lifetime is not making me smile. It's too late to swim. The dogs have been walked. But the book, the big book in the works--The Healing Powers of Honey (Kensington, October 2011)--in the study is calling my name: "Callie. Callie. Callie." I am trying to tune it out but the buzzing...the noise...it's not working...
So, here I sit rereading an ice cream blog post that I penned last July. Translation: The block is bad. The post was a ranking of the best chocolate ice cream. Today, I'm into chocolate and vanilla--a special kind, that is. So this year's winner, according to me the chocolatarian, is...
Vanilla Honey Bee. The carton reads: "Help the honey bees at the http://www.helpthehoneybees.com/ web site. After all, my worker friends pollinate one third of natural foods. That's the stuff I and you eat. The good stuff.
And, of course, as the author of The Healing Powers of Chocolate (Kensington, 2010), I'm sitting here with a pint of Dark Chocolate Haagen Dazs and Vanilla Honey Bee--also by Haagen Dazs--and their awesome job of helping the honey bee. As a Libra, which do I indulge in is the question or do I go into the oh so l-o-n-e-l-y study and work, work, work. Such a decision. No wonder bees work in colonies.
Gosh, to think that last year this time I was in my worker bee mode and did a chocolate ice cream ranking test. This is a must read. Meanwhile, I think I'll ponder how I can relate to the sacred honey bee and/or nibble on both ice creams.
Posted by Cal Orey, Author-Intuitive at 7:44 PM