INTERVIEW with the Healing Powers Series author and Fiction Writer 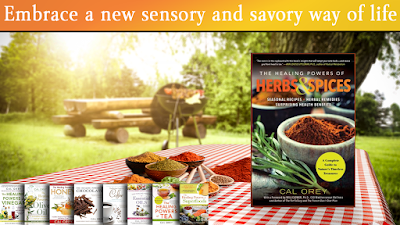 As a native Californian, Cal Orey, M.A., is an accomplished author- journalist and fiction writer. She grew up in the post-hippie era. In her teens she rebelled against processed canned and frozen foods and meat. Blame it on she sensed a plant-based diet was the key to better health, staying lean, and keeping in balance with her mind and body. That is when she began to have an interest in health and natural living. But that's not all. The author speaks out:
In 2021, I've spread my wings and entered the amazing wonderland of fiction writing. I've been a scientist on a trek to the North Pole and South Pole to fight global warming. Then, as a gifted entrepreneur I was an underdog who became a financial success in New York -- but paid the price. Not to forget my road trip/romantic getaway in Australia. And now, I'm a cerebral kid coping with mega challenges in the WWII era in France. And the year is young.
And yes, I still find time to market my Healing Powers series. HONEY has had the Bestseller banner on many bookseller websites for a month. Plus, my latest release HERBS AND SPICES continues to get noticed by major publications including Huffington Post, New York Daily, Newsmax magazine, and libraries worldwide. And I dish up weekly to monthly columns on food and Earth changes. Read on -- an interview about my timeless series.
Deliciously healing surprising…
Q: Sugar or Fat? Which one does a writer need more?
Fat. I used to be a sugar junkie. These days, when I incorporate real butter (no fake stuff for me) and oil(s) with superfoods, I’m satisfied and keep lean and fit. Sugar on occasion in natural ice cream and a homemade cookie or brownie finds its way to my life, but only in moderation.
Q: Your writing resumes are impressive. Two degrees in writing, three decades of articles and book experience. How did you end up as the Healing Powers Series author? 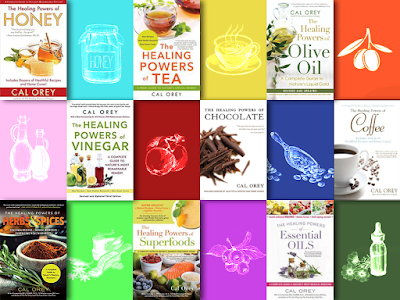 A: Before finishing grad school at San Francisco State University, I was a published magazine writer. I used to write countless articles for well-known national mags on topics from animals to men. I spun both fiction and non-fiction. Then, I moved over to women’s mags and wrote about every romance and relationship subject imaginable. Fast forward to 1999. I got my first real book deal from Kensington, a New York publisher. (I had penned dozens of diet-related mini mags found in grocery stores.) The Vinegar book #1 paved the way to a series. Many moons later, I was known as the Healing Powers author. I’ve written nine books on superfoods: vinegar, olive oil, chocolate, honey, coffee, tea, superfoods, essential oils, and herbs and spices. (Most of these books have been embraced by major book clubs including, One Spirit, Literary Guild, Quality Paperback, and Good Cook.)
Q: Your Healing Power series has also been translated in 20 languages; Congratulations! Tell us a little about the past and new updated and revised olive oil book.
A: When I started the vinegar book, red wine vinegar was supposed to be the new twist.  During my research, however, I discovered while it does contain some good for you compounds like resveratrol (found in red wine), I needed more information to honestly tout vinegar’s health benefits. I fell into the wide world of the Mediterranean Diet and lifestyle because it includes not only red wine but healthful olive oil—and that superfood led to the first and second edition—The Healing Powers of Olive Oil, A Complete Guide to Nature’s Liquid Gold, Revised and Updated. The first edition is my second best-selling book and now the second edition has been released--three formats. Vinegar has sold more than 1/4 million copies.
Q:  Did you discover any real surprises while researching your books?
A: I found out that other oils, including coconut and canola, have healing perks. Combining olive oil with other oils can help fight fatigue, infections, and insomnia, and help you to fight fat and shape up! Tea? I'm still in love with chamomile (it keeps you young) and adore white tea! Superfoods? Ah, pizza, cheese, potatoes, ice cream? You betcha. The right kind in moderation, though.
Q: What's an interesting fact about olive oil that most people don't know?
A:  Discovering the you can combine a variety of oils is becoming more commonplace in the kitchen; even seen on Food Network with its creative celeb chefs as well as every day folks are teaming these oils in entrees to desserts as well as home cures and beauty recipes.
Q: Did you learn something new that will shock readers?
A: Bring on the butter —especially the right kind and right amount. When paired with oils, this twentieth-century “forbidden” saturated fat is a new twenty-first-century health food. I’ve learned that while I was sneaking butter into my recipes and diet that I was doing the right thing. Lose the margarine! And add herbs and spices for more flavor.
Q. Do you have a personal favorite dish that you use two oils instead of just olive oil?
A: Chocolate! I simply adore chocolate semi-homemade brownies. It makes my kitchen smell like I’ve soared to Chocolate Heaven and the taste and crunch with nuts and chewy coconut takes me away to a happy place.