Memories of French Pumpkins and Other Sweet Treats 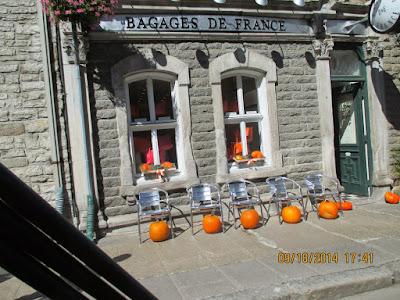 Warm Up to a Pumpkin Treat (or Two)

One autumn on a trip away from the South Shore, I experienced pumpkins lining the cobblestone sidewalks in French-speaking Quebec City, Quebec. A pretty pumpkin patch in the Apple Hill area of Placerville greeted me another Indian summer. And, I’ve enjoyed admiring pumpkins, all sizes, at our local grocery stores.
Last year I bought a huge pumpkin at our friendly Safeway. It was my intention to carve it, put a candle inside, and enjoy it on the deck. Well, the pumpkin did sit on the deck for a while. But it was faceless. Then, I brought it in and placed it by the fireplace. No happy or sad face. Time passed and the pumpkin without an identity ended up sitting on the dining room table amid orange and white candles. Finally, I put the orange ball without a personality (like Wilson in the film Castaway) on top of the fridge. I was going to repurpose it, by removing the seeds for homemade pumpkin seeds. 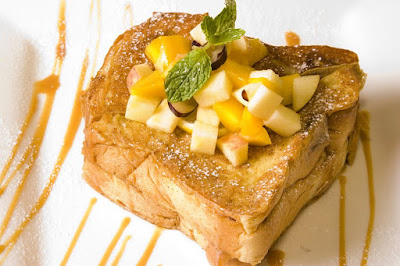 But days passed and then weeks and the poor pumpkin sat solo. One day I noticed an odor. It was the pumpkin that never was celebrated. Sadly, it was tossed in the garbage like a Christmas tree after the holiday season.
So, this year cans of pumpkin puree sit in my pantry. Instead of a pumpkin pie, scones, or fudge, I’m warming up to making Pumpkin French Toast. It’s a fine treat that will get eaten and no waste, right?

In a large frying pan over medium heat, melt butter. Set aside. In a bowl, combine eggs, milk, pumpkin, vanilla, and spices. Mix well. Dunk bread slices (both sides) into the egg mixture. Place each slice into the pan. Medium heat is recommended. Cook for a few minutes and turn over. Repeat till golden brown. Serve hot. Add a pat of butter, drizzle with honey. Serves 2.

This recipe is easy to put together. Not only is it quick it’s versatile. It is good for breakfast, especially paired with chunks of seasonal fruit, and a cup of hot pumpkin spice flavored coffee or tea. But it can suffice as a late-night snack, too. The pumpkin touch is fall-ish. The best part: It won’t be tricked, like the South Shore pumpkin that came to my cabin and never lived a full life.

Posted by Cal Orey, Author-Intuitive at 11:55 AM